Today I had a good chat with two girls who were in my ballet class. They are both 20-year-olds attending university, young, vibrant, full of curiosity. The subject of our discussion was the Blood Type Diet. Coincidentally, both girls are a bit on the chubby side and both want to lose weight—yet don’t have a clue how.

One of them said she tried everything, and was even surmising taking diet pills, even though she was aware of the futility and health risks. She told me she often has great swings in weight.

It soon became clear to me that both are Type O’s like me. And both have been eating the wrong food for their type. They love wheat products like bread, pasta and noodles; corns and corn-derived products—corn on the cob and Coke, which contains High Fructose Corn Syrup; and dairy products, like milk, cheese and yogurt. All of these are the worst forms of “poison” for Type O’s. Both also reported itchiness in the throat and mucous after drinking soy milk. I suspect they are, like me, Type O Non-Secretors, who don’t take soy products well. It is interesting that again and again the same pattern is observed: People preferring to eat a lot of what their blood cells repel and fight against.

This is not just about losing weight. It turned out that one of the girls has always had headaches after drinking milk. The other had such a severe case of stomach inflammation that she was hospitalized when she was a teenager and lost almost 20 pounds in a week because it was too painful for her to eat.

I was nodding my head, thinking how accurately the Blood Type Diet can actually give “prognosis” of our health. None of these experiences surprised me. As a teenager, I had frequent boots of stomach pain and acid reflux. Later on, as a working adult, I had constipation and diarrhea often. In fact, I had the habit of drinking coffee for 20 years, and I loved putting milk or cream and sugar in my coffee. Every morning I would have diarrhea after my breakfast, but I still did not pay attention.

Now, such gastrointestinal discomfort is a loud signal, isn’t it?

Why have we gotten so accustomed to our pains that we simply brush them aside, believing they are part of the conditions of life? Our body is super smart. When it is in pain, it is sending us a warning signal. It is important to stand still and listen.

I’m very delighted, though, to share this knowledge about the Blood Type Diet with my young friends. It has given them a glimpse of hope. One of them was devastated to know that everything she loves to eat is an “avoid.” But she is smart enough to immediately understand the reason why she has been eating so much carb and corn is because she is not a “meat eater,” thus she needs to satisfy her hunger with those filling foods.

I suggested to them that they each try to cut out some of the avoids—or even just one, say wheat—for three weeks and observe if their digestion improves and if they manage to lose some weight.

The other friend, also very smart, picked up the message immediately: “It’s actually liberating because now that we know what not to eat, we’ll have a chance to really lose weight!” Bravo! I told her: “We Type O’s are very lucky. There is still so much meat, fish and vegetable that we can eat to our hearts’ content!”

Just check out the sample “Bennies” (Beneficial Food) below for Type O’s. 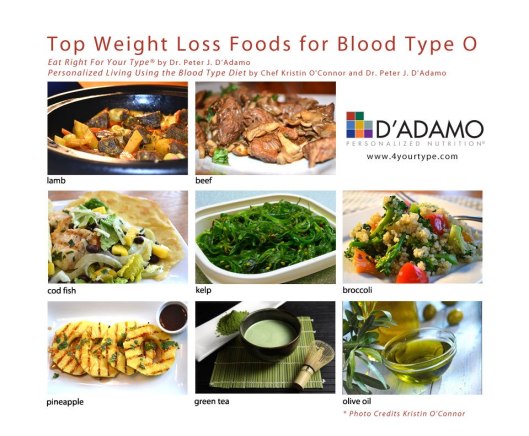